At Harriet Kelsall Bespoke Jewellery, palladium is a popular metal choice for engagement ring commissions. Due to only receiving official recognition as a precious metal in 2010, palladium is not a commonly heard of material. However, it has certainly gained its place as an attractive and sought-after alloy.

Palladium is part of the Platinum Group Metals, which is a collection of metals that are resistant to corrosion and oxidisation (meaning it will not tarnish in air and will stay white forever). It is found in very rare minerals called Cooperate and Polarite, and is mined in only a handful of deposits around the world. Russia and South Africa produce roughly 93% of the palladium mined in the world, but it is also found in Canada and the United States. Palladium is also used as one of the alloys in white gold to change the hue of the metal.

Palladium has a similar appearance to platinum. It has a crisp steely white quality, but it is 40% lighter than Platinum due to being less dense. Its lighter weight can be an attractive aspect, as it offers comfort to jewellery that may be worn on a daily basis. Large stones may add a considerable amount of weight to a piece of jewellery, so the lightness of palladium can help to counteract this. A lighter weight can also mean more versatility of design, making it a desirable metal for our goldsmiths to work with. Alike to platinum, it is also a hypoallergenic metal, which makes it a popular choice for those who are sensitive to other alloys.

All in all, palladium is a fantastic choice for all kinds of jewellery and definitely worth considering if you are unsure about a suitable metal for bespoke design. 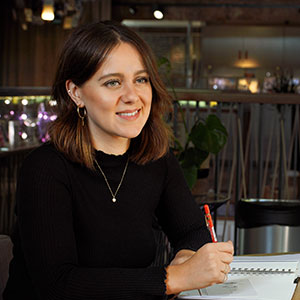 Beth is a Designer at our Hertfordshire Jewellery Centre