Martin wanted to surprise Sharon with an eternity ring for their ten year anniversary. When they first got engaged Sharon was torn between the ring she eventually chose and another which had a pink diamond. Martin never forgot the pink diamond and decided that an eternity ring would be a wonderful way to surprise Sharon with the coloured stone. After we showed Martin a selection of pink stones, he chose a deep pink 2 mm heat treated diamond. To add a sparkle to the design, but not outshine the ring, nine 1.55mm white diamonds were scattered around the band. Soft brushed platinum and a soft courting profile have been used to match Sharon's other rings. 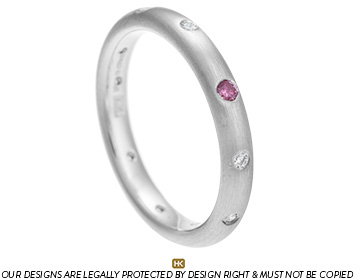