All these beautiful garnets are ready to be used in your commission. Click on each to see a short video. 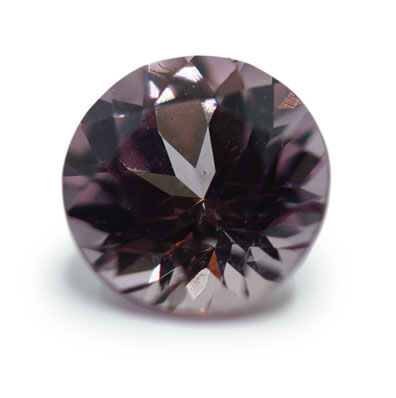 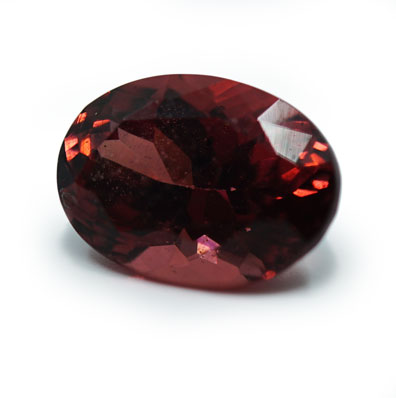 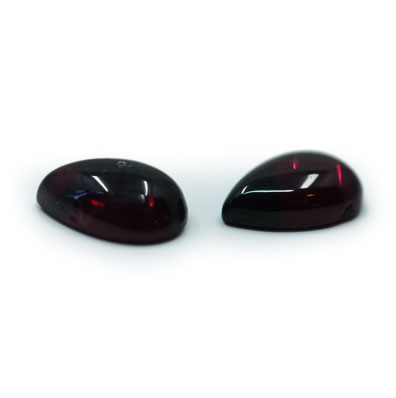 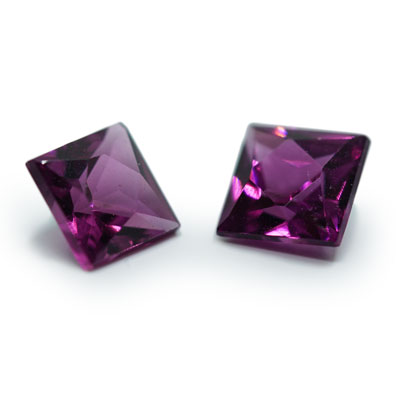 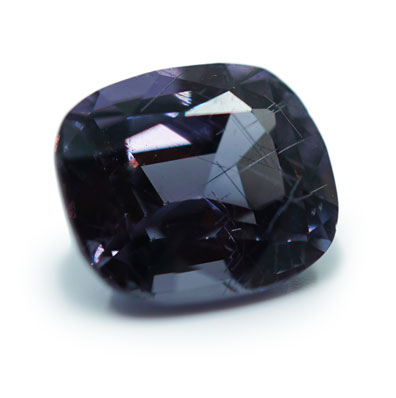 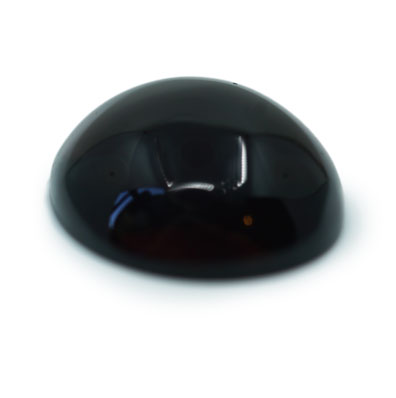 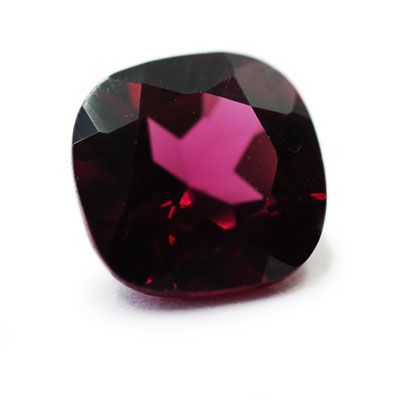 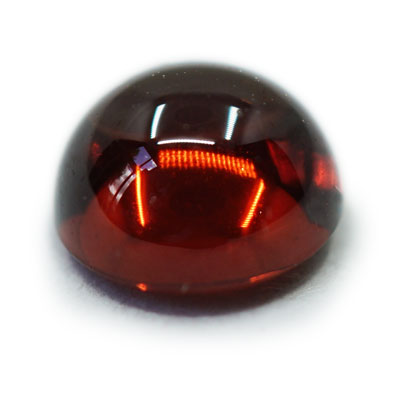 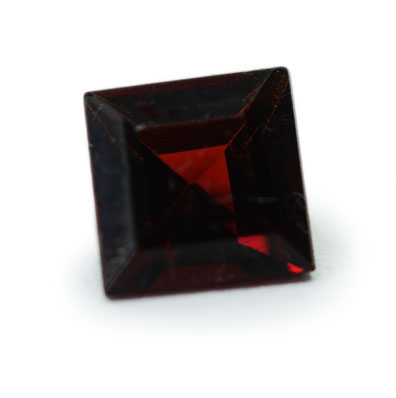 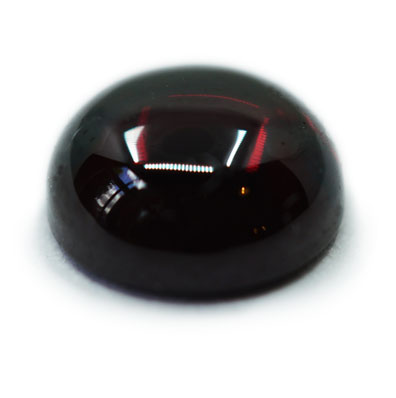 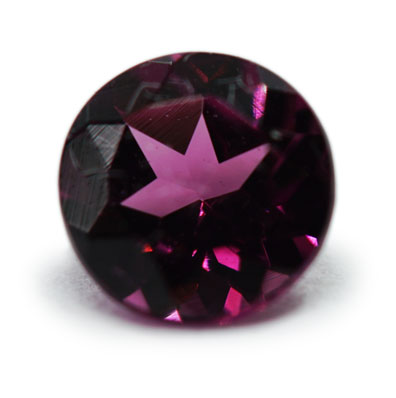 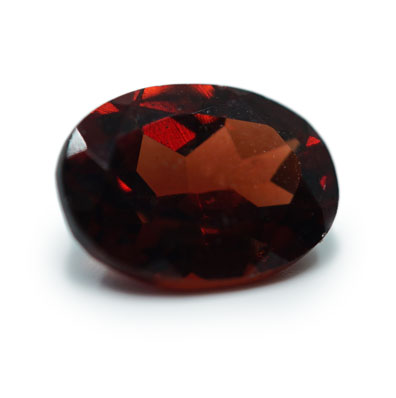 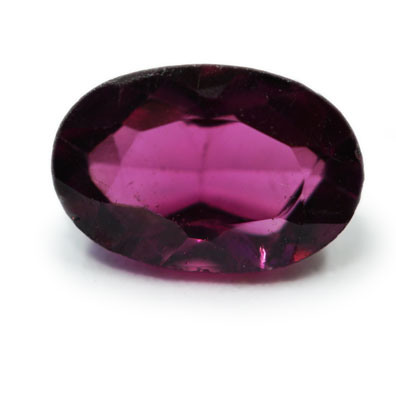 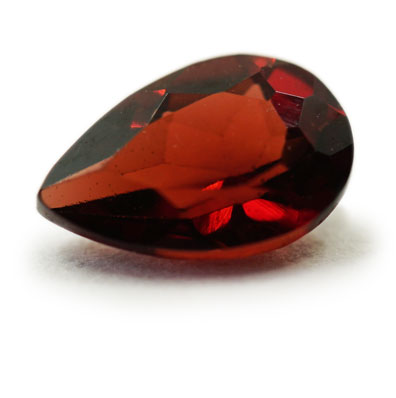 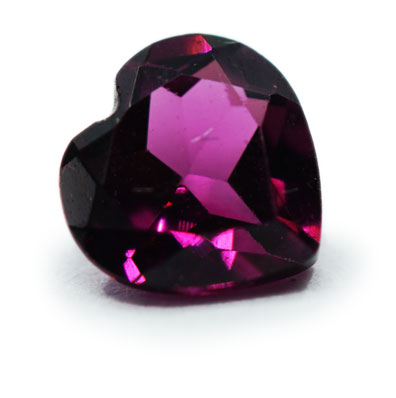 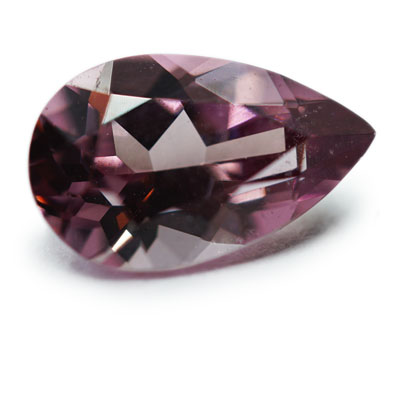 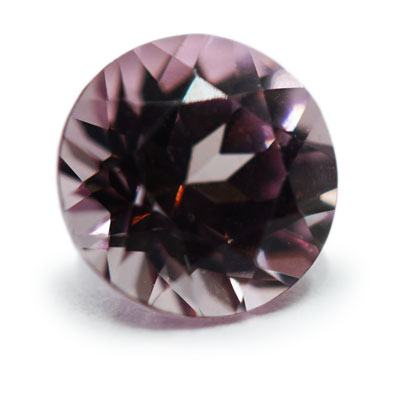 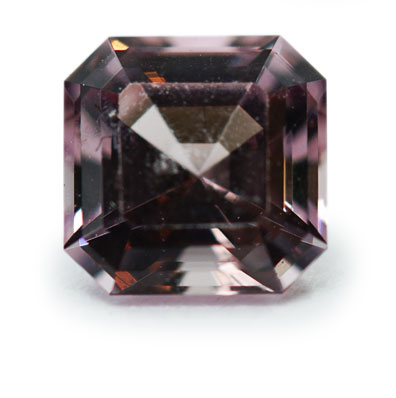 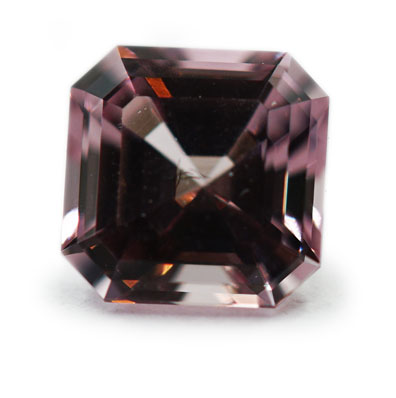 You can work with our designers online and view these garnets at home. Find out more. 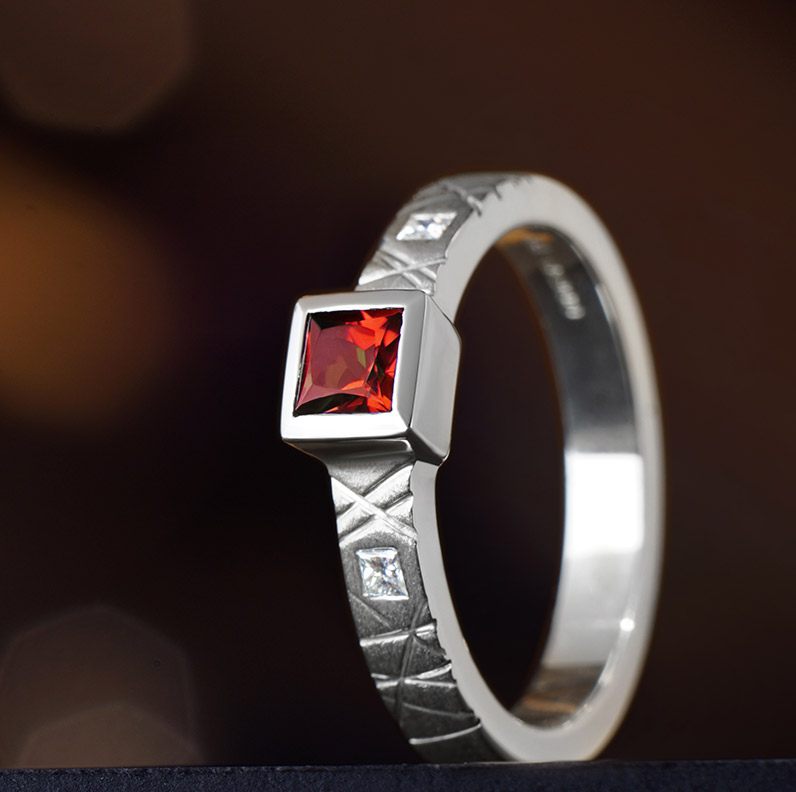 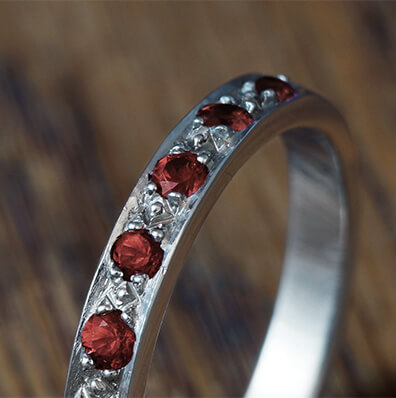 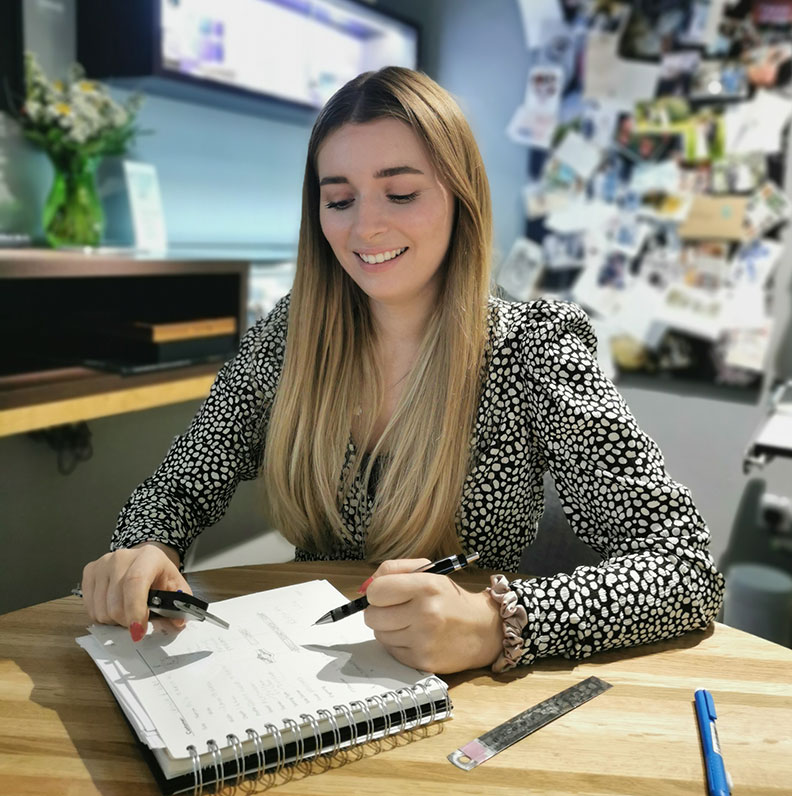 Garnets are found fairly widely in metamorphic rock, and are silicates which are often formed when some aluminium-based rocks are heated. Unlike most metamorphic rocks they do not need pressure to form; what often happens is that the chemicals in the base rock are re-distributed. In higher temperatures and pressures the garnet may disappear altogether! They tend to form in cubic crystals, with twelve sides, known as a rhombic dodecahedron - this basic shape is the trademark of garnets, for no other crystal shape is so closely associated with a single mineral group. Garnets tend to fracture in conchoidal style - breakages are shaped like seashells.

The name an individual piece is given depends on the largest percentage of its composition, which will also generally determine its colour. Most have a Mohs hardness rating of 7-7.5, although because of their crystal formation they can be rather brittle.

As garnets are relatively brittle, they tend to be cut into shapes that don't have many corners ie. brilliant, oval, cushion, step, emerald, or cabochon. It is possible to get princess cut stones down to 2mm without too many problems, but they are not generally recommended for jewellery (particularly engagement rings) and in particular when the stone is small.

Garnet jewellery has been found that dates back to the Bronze Age (about 3000 BC). The majority of this ancient jewellery was a very primitive style of lapidary found among the graves of a village of lake dwellers. Other documentation of ancient jewellery containing garnet has been found among remains in Sweden between 1100 and 2000 B.C., in Samaria around 2300 B.C. and in Egypt in 3100 B.C. As early as the later years of 400 B.C., garnet signet rings were found in Greece, and it is believed that Greeks were the first to use garnet at this capacity. Garnet has also been documented as a largely admired treasure in Greece during the 3rd and 4th centuries.

Garnet is mainly symbolic of truth and constancy, but it has a host of attributes, including: repelling flying insects; protection against lightning; an antidote to plague and fever; warding off inflammatory diseases; helping the wearer to be firm and steadfast; guaranteeing cheerfulness if obtained lawfully; cursing those who have acquired it unlawfully; changing colour when danger approaches and perpetuating friendships.

Gem quality stones are often recovered using placer mining techniques - gathering the gems from concentrations of stones that have been washed downstream, similar (on a small scale) to the old fashioned style of panning for gold. Nowadays this can be done on a much bigger scale, running gravel through a trough of flowing water so the dense gems are left in the bottom while the lighter surplus is washed away. As a result, the gems are often rounded into pebbles by the stream.

Almandine is the most common garnet. It was named after Albanda (now Araphisar) in Turkey, where it has been cut for hundreds of years. It is generally quite a pinky stone and rutile needles are sometimes present, creating four-rayed stars when cut into cabochon. It can even be found as inclusions in diamond. Almandine can sometimes be quite dark, which isn't great for jewellery as it doesn't sparkle so much. Cuts with lots of facets (like the brilliant cut) can enhance this. Very large crystals exist, but because of their dark tone, only small to medium sized gems are generally faceted. These tend to be cut very shallow, to let light pass through. Almandine garnets from Idaho and India sometimes have asbestos fibre inclusions that will produce star stones when properly cut. They are highly prized by collectors, because of their rarity. They are also one of the most difficult gems to cut. Almandine is very closely related to pyrope; most gems used in jewellery contain elements of each but pure forms of one or the other are rare.

Andradite is a type of garnet with several names depending on colour variation: yellow ones where the colour comes from titanium are called topazolite; yellowish-green or emerald green ones where the colour is from chromium are demantoid or Uralian emerald; black ones are melanite (their colour also comes from titanium and tend to be opaque.) There is also brownish-red, brownish-yellow and greyish-green. It is slightly softer then the other garnets, measuring 6.5-7 on the Moh scale, so this is probably why they're not commonly used in jewellery despite the fact they're actually better at splitting light into colours than diamonds. Dark body colours usually mask this colour dispersion but small, light coloured gems are apparently dazzling!

Grossular garnet is generally green, and its name comes from the Latin grossularia meaning gooseberry. It can also be orange, as well as a whole range of other colours, although only one other is generally considered separately, which is hessonite. Grossular garnets are occasionally found in meteorites (perhaps this is where Superman's weakness comes from, not kryptonite at all!) Known in this country and the USA as tsavorite, green garnets are called tsavolite in Europe and occasionally also known as South African or Transvaal jade. It is named after its only source, the Tsavo Valley in Kenya, and demand relatively high value in today's market. While faceted stones approaching 20 carats are known of, their deep colouring usually keeps their size below three carats. Pliny often referred to a smaragdus stone in his writings, which was always assumed to have been emerald (this is where the word emerald came from, apparently!).

Hessonite is the reddish-brown variety of grossular garnet; the name apparently comes from a Greek word meaning inferior and refers to its inferior hardness to the other garnets. It's often called the cinnamon stone but we tend to call it russet because of its colour, and is mostly found in Sri Lanka, but also in a the US, Mexico, Canada, Africa, Scotland and Italy.

Malaia is a Bantu word that means out of the family, or out of the tribe. It is also used to mean prostitute or deceiver. It came into usage for a number of garnets that did not fit into any of the standard categories.

Pyrope was named in 1805 after the Greek words for fire and 'to appear'. It tends to be a deep red colour that can rival ruby, but can be slightly more violet or pink, or orangey. The colours come from the chemical make-up of the individual stones, and those that have high chromium content can have colour change tendencies similar to alexandrite. Some nice, deep red stones are found in Arizona, where ants bring them to the surface, so they are dubbed ant hill garnets. Because of their dark tone, gems are rarely faceted in sizes over one carat. Pyrope is very closely related to almandine; most gems used in jewellery contain elements of each but pure forms of one or the other are rare.

Rhodolite could come from the Greek word rhodon, meaning rose, but other scholars compare the name to rhododendron. In either case, the name is comparing the colour to a beautiful, plumy pink flower. It is a combination of almandine and pyrope, and is believed to balance emotion and foster greater awareness.

Spessartine garnet is named Spessart in Bavaria, Germany. It is pale yellow when nearly pure, but varies through orange to deep red. Pure stones are quite rare, though; the redder colouration comes from the amount of almandine present. Gem quality spessartine is rare, and tends to be cut more for collectors than jewellery. The highest value spessartine is a deep orange colour.

Uvarovite is the rarest of the gem garnets, and is named after the Russian nobleman Count Uvarov who was a keen gemmologist. Mostly the gems are too small to cut, probably because of the large amounts of chromium present that gives it it's bright green colour but also inhibits crystal growth.

Garnets exhibit the widest variety of colour changes in the gem world, with almost every hue exhibited. Until recently it has always been said that they come in every colour of the rainbow except blue, but although this is true in natural light, but there are recent discoveries of garnets that turn blue in artificial light. Colour change garnets are mostly pyrope and spessartite in composition. Their primary source is Africa. Idaho garnets, which are primarily almandine/pyrope mixtures, occasionally show a strong colour shift from red to purplish red.

In Greek mythology, Proteus was a sea god, capable of changing his shape. It has become a noun for one who easily changes their appearance or principles. Proteus are the only treated garnets. All the others resist change, but a few almandine/pyropes from the US will change into Proteus, which is a treatment that brings a thin layer of metals to the surface, causing them to have a dual appearance. In reflected light, they have a dark grey, metallic lustre, much like hematite. In transmitted light, the dark red of the garnet shows through.

Garnet can be a lovely and often inexpensive choice for your engagement ring and is available in a wide choice of colours.