These colourful alexandrite are ready to be used in your commission. Click on each to see a short video.

You can work with our designers online and view these alexandrites at home. Find out more. 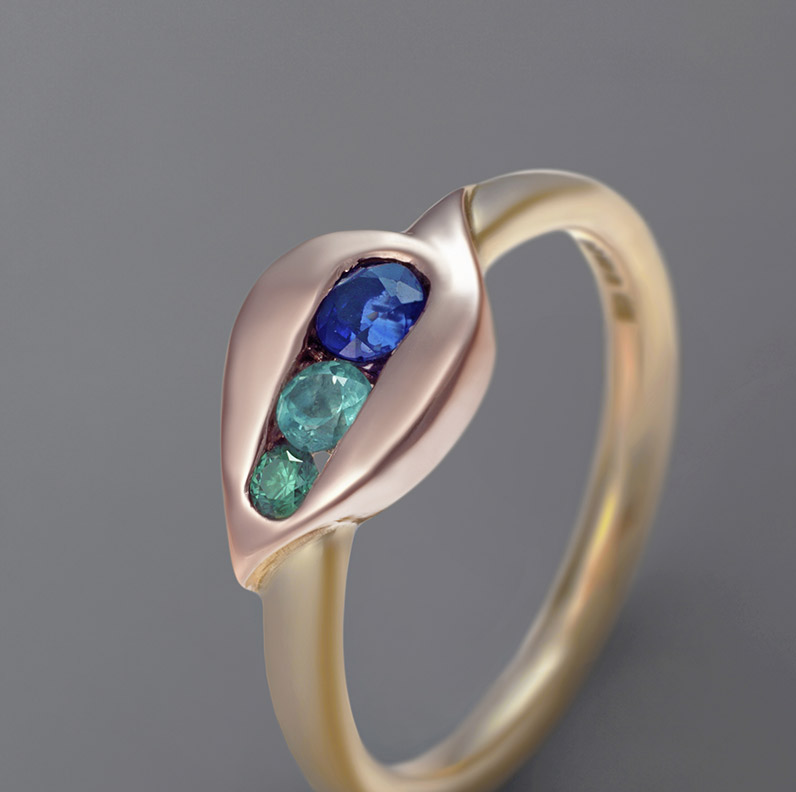 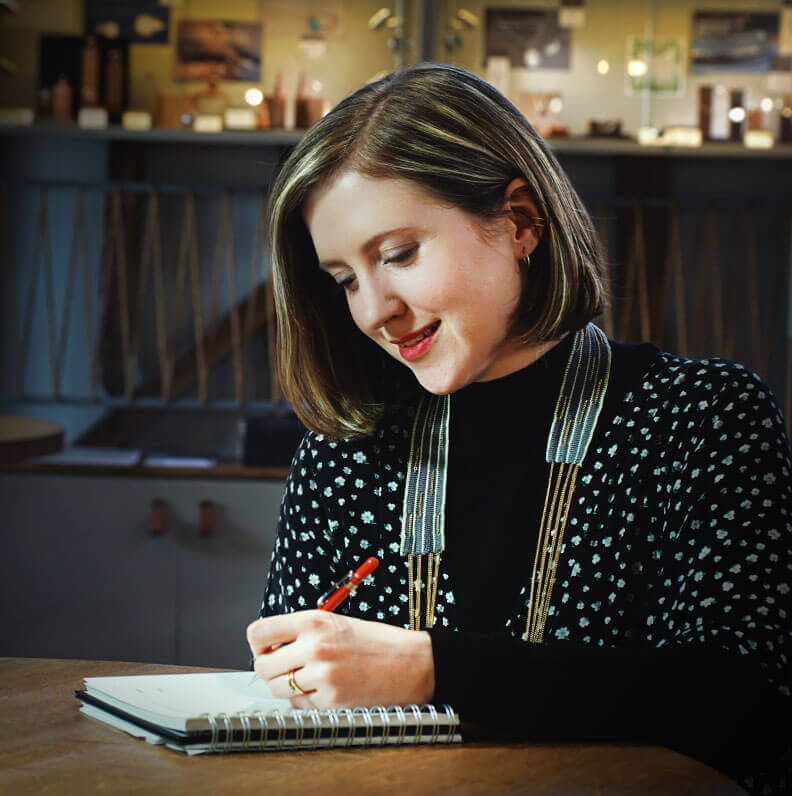 Alexandrite is the colour changing, gem variety of the crystal form of chrysoberyl. Chrysoberyl is a fairly common stone, but alexandrite is considered by many to be one of the rarest and most expensive of gems - so not everyone's choice for their engagement ring!

Chrysoberyl and alexandrite both have a hardness of 8.5 on the Moh's scale, so are only just softer than sapphires, and because of this, weathered crystals are often found in deposits in streams and gravel beds. The largest faceted chrysoberyl was from Russia and weighs 66cts; strangely the largest known alexandrite was also 66cts but came from Sri Lanka and is currently in the Smithsonian Institute. However, pieces of rough alexandrite of more than 10cts (or 3cts if faceted) are rare.

Alexandrite was named after Tsar Alexander II, as it was apparently found on his birthday and was named at his coming-of-age ceremony in 1834. Since it shows both red and green, the principal colours of old Imperial Russia, it inevitably became the national stone of tsarist Russia, and was collected by the Russian royal family.

Whereas chrysoberyl crystals tend to be yellow/yellowy-green/green/brown in colour, alexandrite changes colour depending on the light it is viewed in. The specific geological conditions it formed in gave it this property - the chemical elements beryllium (a major ingredient in chrysoberyl) and chromium (the colouring agent in alexandrite) have contrasting chemical characteristics and do not as a rule occur together, usually being found in different rock types. Not only have these rock types got to be brought into contact with each other, but there cannot be any silica present (unusual in itself because this is the second most common element in the Earth's crust) to prevent the growth of emerald. This geological scenario has only happened occasionally in the Earth's history, which is why alexandrite crystals are so rare. In a single piece of alexandrite, the chromium is in such a balanced situation that if it is viewed in natural sunlight or fluorescent light, the crystal will be green or greenish blue, however, if it is seen in incandescent light from a normal indoor light bulb, then the crystal will appear red, purplish red or raspberry. The stones we have seen at Harriet Kelsall Bespoke Jewellery Design more recently tend to have a blue-green/deep purple colour change and are therefore likely to have come from Brazil.

Although alexandrite shows three distinct colours (the red/green that we see, but also yellow that we don't tend to) it is not strictly speaking pleochroic. Rather than light travelling through the gem at different speeds and creating different colours depending on the angle you look at it, its colour is dependant on the quality of the light source. Incandescent light is rather red, causing alexandrite to appear reddish. The colours in daylight are more equally balanced, but since our eyes are more sensitive to green light, we see the greener colours in the stone when viewed in daylight. Alexandrite is better at colour changing than any other natural stone, so would make a stunning engagement ring choice.

Deposits of (green/red) alexandrite were initially found in the Urals in Russia (which is why it was named after the soon-to-be Tsar of the time) but these have mostly now been worked out. There was a period when the mine closed, which led to a drop in availability and therefore a reduction in the amount the stone was used, but in 1987 top quality pieces with good (bluey green / raspberry) colour change were found in Brazil, renewing interest. (Interestingly, like chrysoberyl, some Brazilian Alexandrite displays chatoyancy (cat's eye) tendencies.) Most alexandrite is now mined in Brazil and Sri Lanka; Russian alexandrite is still considered to be the best although determining the exact origin of a gem is a matter for professionals. Recently Tanzania has also produced some stunning stones.

Although it is considered a rarity, our gemstone dealers do stock it or can get hold of it for us, especially since improved trade relationships between Russia and the rest of the world have ensured a better supply of Russian alexandrites to the market. Availability will always need to be confirmed with dealers as it may take a while to find a precise cut or percentage of colour change for a customer.

Alexandrite is a great stone for experts, enthusiasts and connoisseurs, a true understatement stone since its uniqueness and high value are not immediately evident; the colour change will only occur on exposure to different light sources. It is considered a stone of 'very good omen', particularly because it is supposed to strengthen the wearer's intuition in critical situations, and help him or her find new ways forward in situations where logic will not provide an answer. Alexandrite is also reputed to aid creativity and to inspire the imagination.

It is a birthstone for June, and can therefore be a good replacement in jewellery and rings for pearls when customers want a faceted stone. Alexandrite is particularly suitable in something like an eternity ring with multiple birthstones where the hardness of the stone and ability to invisibly set it are distinct advantages.

The more distinct the colour change (alexandrite can exhibit everything from 100% to just 5% colour change) and the closer the colours are to pure green and red, the higher the value. Clarity is another significant grading factor. As with most gems, the majority of what is found is cabbing grade, rather than clean facetable material. However, with alexandrite the colour change has more effect on value than clarity. For example, if you have two gems the same weight, one eye clean with a 50% brownish/red to greenish/blue colour change, and the other an opaque cab with a 100% green to red colour change, the second would be higher in value. Fine alexandrite without any trace of undesirable browns or greys, which has been finely faceted and weighs above 1ct is therefore among the most expensive gemstones in the world, rarer than fine ruby, sapphire or emerald. If the origin of the stone is known beyond dispute to be Russia, it will be a real rarity of enormous value.

You sometimes find alexandrite in old jewellery; particularly in antique Russian pieces as Russian master jewellers loved this stone. Tiffany's master gemmologist George Frederick Kunz was also fascinated by alexandrite; Tiffany's produced a beautiful series of rings and platinum ensembles at the end of the 19th and beginning of the 20th century using it. Smaller alexandrites were occasionally also used in Victorian jewellery in England. Remember, though, that treated topaz can exhibit alexandrite-like colour change, as can some sapphires which are also known as alexandrine. Synthetic corundum with an alexandrite-like colour change is often sold as alexandrite on the gemstone market. Some varieties have been available almost as long as the gem itself!

Synthetic pieces are generally far cheaper than natural alexandrite, although we have found (surprisingly) that 1.5-2mm brilliant cut natural stones are actually less expensive than synthetics! If it's not real it is likely to actually be a synthetic colour change sapphire coloured by vanadium (the element that provides the blue colour in tanzanite) - the technique for making them has been around for nearly as long as the natural ones! As a guideline, if you're looking at an old, set stone with good clarity, strong colour change, reasonable size, and there is no history to the piece indicating that the owner was exceptionally wealthy; it is most likely a synthetic.

The Czochralski pulled-growth method, developed around 1917 by a scientist of the same name, is what is used to create synthetic ruby, sapphire, spinel, yttrium-aluminum-gamet (YAG), gadolinium-gallium-garnet (GGG), and alexandrite. In the Czochralski method, powdered ingredients are melted in a platinum, iridium, graphite, or ceramic crucible. A seed crystal is attached to one end of a rotating rod, the rod is lowered into the crucible until the seed just touches the melt, and then the rod is slowly withdrawn. The crystal grows as the seed pulls materials from the melt, and the material cools and solidifies. Because of surface tension of the melt, the growing crystal stays in contact with the molten material and continues to grow until the melt is depleted. Typically, the seed is pulled from the melt at a rate of 0.0394-3.94 in (1-100 mm) per hour. Crystals grown using this method can be very large, more than 1.97 in (50 mm) in diameter and 3.281 ft (1 m) in length, and of very high purity. Each year producers grow millions of carats of crystals using this method.

Alexandrites are occasionally waxed or oiled to improve the appearance of any surface flaws. Fissures are also sometimes filled with resin. Alexandrite should not be put in the ultrasonic cleaner.

If you are considering an alexandrite in your engagement ring please contact us and we would be delighted to answer any questions, provide an estimate or arrange a design consultation for a bespoke engagement ring