Tim and Steffi had previously visited us from Germany to commission their engagement and wedding rings and Tim got in touch again as he wanted a pendant to commemorate his late grandparent's. He had already decided that he wanted the pendant to be based upon the four seasons to capture the longevity of their lives and the many seasons they lived through together. Tim had sourced his own natural fancy colour pear cut diamonds and chose a 0.32 carat yellow diamond to represent summer, a 0.11 carat blue diamond for winter, a 0.16 carat orangey-pink stone for autumn and a 0.14 carat pink stone for spring. The figure of eight design represents the continuous cycle of the seasons and the use of both 9 carat yellow and 9 carat white gold further enhances the fluidity of the design. An invisible bail has been used at the back of the pendant so it appears to float on the elegant 9 carat white gold chain.n/a 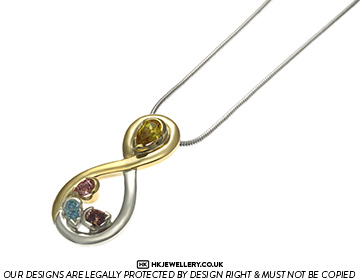