As mentioned in April’s previous article (April 19th, A Brief History of Wedding Rings) the gold from Kate Middleton’s wedding ring originally came from a mine in Wales. On occasion we get asked about Welsh gold since people like to use local materials, particularly if they have a family affiliation with somewhere, so I thought people might like to know a little more about this particularly rare material. 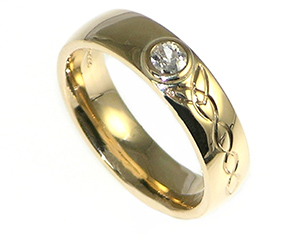 The earliest known mine for Welsh gold was the Dolaucothi mine in Carmarthanshire, which was exploited by the Romans between 75AD and at least 300AD. Their extraordinary initial hydraulic mining methods were vividly depicted in Tony Robinson’s Birth of Britain series, where he showed how rivers were diverted and channelled to scour the land, carving gouges out of the earth and removing the gold in the process. This can still be seen today as the site was donated to the National Trust in 1941 so visitors can look around not only the surface but also the underground workings which eventually followed the hydraulic method. The workings were under the control of the Roman military, with a fort next to the present village of Pumsaint. Of course the area has yielded rich pickings in terms of Roman pottery, but in the 18th century a horde of gold objects was also found nearby which is now on display in the British Museum. (Whether the gold objects were actually made from Welsh gold or in fact came from Ireland is difficult to determine – Ireland was a major producer of gold artefacts and had close links with Wales at this time.) The Dolaucothi mine closed in 1938.

The Clogau St David's Mine is situated in Gwynedd, north-west Wales and was once the largest and richest mine of all the gold mines in the Dolgellau mining area. It originally produced copper and lead, but the mine developed into gold production in the 1862 'rush' and continued as a major operator until 1911. In this time, 165,031 tons of ore was mined which resulted in 2,442 kg of gold – comparatively a much higher yield per ton of ore than comes from South African mines. Since 1911 the mine has been re-opened several times for smaller scale operations, and although it has been closed since 1998 the exploration company who currently own it hope to restore the mine to production.

The mine that produced the gold which forms Kate Middleton’s ring is the Gwynfyndd Mine, near Gwynedd. It was discovered in 1860 and was active until 1998. In the 1990s the mine was opened to the public and provided guided tours which included the opportunity to pan for gold. The mine closed because of Health and Safety issues, and because of changing pollution control legislation which would have meant the owners were liable for the quality of the mine discharge into the nearby River Mawddach.

In 1923 the Queen Mother had her wedding ring made from Welsh gold and in April 1986, on her 60th birthday, the Queen was presented with a kilogram ingot of gold from the Gwynfyndd mine. Since then pieces of this original ingot have been turned into several rings for other members of the Royal family, including of course for the most recent addition – Kate Middleton, the new Duchess of Cambridge.

There are companies who sell what they are labeling as ‘Welsh gold’ jewellery, however due to its scarcity even they do not claim that the whole piece of jewellery is made with purely Welsh gold. Other gold bullion has to be added to the alloy with ‘a touch’ of gold which has actually come from Welsh soil. The gold is more expensive than non-Welsh gold and the companies that sell it have a monopoly on it, preventing other jewellers from using it.

Gold from the Gwynfynydd Mine has also been incorporated into several modern awards including in the prestigious Glyndŵr Award for excellence in the arts in Wales.