Garnet is a lovely red gemstone which so often gets used in dress jewellery but sadly gets forgotten when it comes to engagement rings, wedding rings and eternity rings. But Garnet’s can make some of the most beautiful unusual rings. 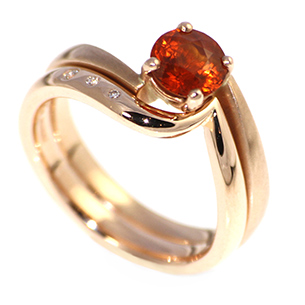 Garnet’s have a hardness of 6 ½ – 7 ½ on the Mohs scale and a cubic crystal system, making them durable as well as beautiful! Their lustre can vary from vitreous to adamantine to resinous… so there is plenty of choice. They are often called ‘carbuncles’ as they are quite common in cabochon cuts. They can be a great option for your wedding rings as they can be sourced in most colours except for blue! It has been used since the Bronze Age and was a popular adornment in the late Roman period. They can be sourced from Tanzania, Kenya, Brazil, Argentine, Pakistan, South Africa, Sri Lanka, India, Madagascar, Switzerland, Namibia, Mali, Scandinavia and Russia… to name a few!

They can be a good indicator of diamond deposits as they can form in similar conditions! Garnets, unlike most gemstones do not undergo treatments for enhancement and can be fairly good value for money… so its good news for anyone struggling with their engagement ring budget. Be careful though as today you can also find garnet topped doublets which are used to mimic different gemstones e.g. green glass to imitate emerald and blue glass to imitate blue sapphire.

Pink Grossular
This is a pink garnet whose colour comes form the presence of iron, and it can be found in surprisingly bright colours! It is also known by the name rosolite and raspberry Grossular! Check out the photo to the right which shows the amazing internal colour zoning! It is often cut into polished slabs and found in South Africa and Mexico. It is said to be an energising stone for the owner and can help both emotionally and physically.

Green Grossular
The name Grossular actually comes from the botanical name for a gooseberry after the discovery of a gooseberry colour variation known as hydrogrossular garnet. They can be sourced in a whole variety of colours from a sea foam to vibrant bright green. The transparent variety is known and tsavorite and is mined in the Tsavo area of Kenya. This is usually facetted and cut into brilliant cuts, polished slabs and beads. They tend to be a maximum size of around 2 carats and can be fairly included. Their colour makes them a great alternative to emerald as they are more durable with a better clarity generally. They are the most expensive garnet in terms of carat weight. There is another variety which is known as Transvaal Jade which is mined in massive sizes.

Malay Garnet
This is a relatively new discovery in the garnet family. It is known for its peachy pink colours, but can also be sourced in apricot yellow, golden brown and green.

Andradite
There are three varieties of this gemstone; demantoid (green), topazolite (yellow / green), and melanite (dark red or black – for those of you who are familiar with American beverages they are often described as having a rootbeer colour!). Demantoid often has fine ‘horsetail’ inclusions of asbestos. It is very rare and tends to be in a maximum size of around 1 carat. It is actually considered to have more fire than diamond and is considered the most valuale type of garnet. They are usually cut into brilliant, oval and mixed cuts.