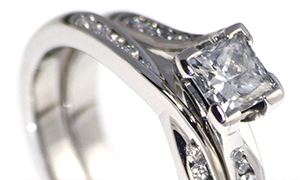 Designing engagement rings for people is a real honour... We are entrusted to come up with something which is a symbol of a couple's love and to ensure that it is also something that someone will want to wear every day for the rest of their lives. People bring all sorts of ideas to us as a starting point for the design of their ring, but one recurring theme is the idea of being together forever.

Shirley Bassey sang 'diamonds are forever' and this certainly resonates with a lot of people. Diamonds are the most commonly used stones for engagement rings, and many people feel that it's not an engagement ring without one! The clear, bright white sparkle of a nice diamond cannot be denied, but it's not everyone's cup of tea, so what other options are there to express 'forever'?

One of the oldest symbols of infinity is the ouroboros- the snake eating his tail. Whilst not everyone likes the idea of snakes on an engagement ring it is occasionally asked for and can be used to create really interesting and highly personal designs.

Other old rings incorporated two strands of metal entwined together around the whole ring to express the continuity of two lives being lived together. If you like this idea but the look is too fussy then how about engraving the strands instead? This gives a more subtle look which can add detail to the band but if there is a stone in the ring it still keeps the focus on that rather than the metal around it. Other celtic knot work can be used in the same way, although of course the level of detail which can be achieved is limited by the width of the band you go for- some of the designs are more complicated than others!

One of the simplest knot designs is the figure of eight shaped infinity symbol often used in mathematics. The loops join in such a way that there is no end or beginning, thus expressing infinity. It works really well being engraved onto the band of an engagement ring, but also with the shape worked into the metal itself.

An extension of this shape is the three pointed trinity symbol, which is sometimes used to express the Christian holy trinity (Father, Son and Holy Spirit.) We sometimes find people also link it to there being three in a relationship (mum, dad and child) or more often they use it simply because it's pretty. The three points in the trinity symbol work really well in an engagement ring with a central stone since two of the points can wrap around the setting for the stone, with the third going along the band and round the sides of the finger.

The other request we have had recently is for something inspired by the möbius twist. This geometrical anomaly is like a three dimensional, slightly twisted infinity symbol. Best shown with a piece of paper, you can start drawing a line on the twist, follow it round inside the twist, then outside, and back to the beginning… it effectively has no inside and no outside as well as not start or end. We weren’t entirely sure how comfortable a ring like this might be, but it does work really well and the images of the rings we have made on our website have since inspired other rings using the same principle.

Of course the simplest of all infinity designs is a plain ring without a break – the full circle has been used for centuries in wedding rings as it has exactly this meaning. If you want to incorporate stones into a ring like this they can either be set within the width of the band or in a setting which sits on top instead. Either will make a beautiful, simple design which your partner will want to wear forever.