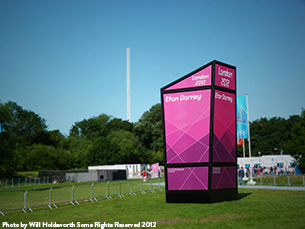 Prompted by our recent success at the Olympics this year, and remembering that I'd previously written a blog about the Toronto Winter Olympic medals, I thought I should write a little about the story of the medals from our very own Games.

I had hoped that the medals this year would be made from Fairtrade and Fairmined gold, given the progress made in this area in recent years, but this sadly wasn't to be. The metals are traceable, though, which is always interesting:

The precious gold and silver ore was supplied by Rio Tinto who are one of the sponsors of this year's Games. It was mined at Kennecott Utah Copper Mine near Salt Lake City in the US, and also from the Oyu Tolgoi project in Mongolia. Of the non-precious metals in the bronze medals, the zinc came from a mine in Australia and from recycled stock, and the tin from a mine in Cornwall.

The gold medal actually contains a minimum of 6g of gold. This sounds quite a lot until you realise that each 85mm diameter, 7mm deep piece weighs 375-400g! This means that the gold makes up 1.34% of the alloy, with 92.5% silver and the rest copper.

The silver medal is 92.5% silver, with the remainder copper. Sterling silver (that is used in fine jewellery) also contains 92.5% silver.

The imagery on the front of the medals for the summer Olympics stays the same each year - Nike, the Greek goddess of Victory steps out of the Parthenon and into the new hosting city. It has been said that the athletes themselves are not terribly worried about what's on the backs of the medals so long as they win one(!) but despite this, a lot of thought, time & effort goes into their design as this is different each year.

The London 2012 Organising Committee Victory Ceremonies team worked with Philip Attwood, the British Museum’s Keeper of Coins and Medals, to look at the symbolism and history of medals in Europe in the last century, and a panel was set up to review the designs submitted by over 100 artists. The Athletes’ Committee and the British Olympic Association also joined in the discussions. Together these groups chose the design of decorative artist David Watkins to grace the other side of their medals, who says of his work:

I take a great deal of my inspiration from the visual language inherent within contemporary science – from analysis of population growth, epidemiology, weather patterns, brainwaves, traffic flows and market trading, to the beating action of the human heart. By sampling images, cross-referencing, overlaying and contrasting them, my work joins together sometimes disparate fields that share the common theme of the study of flows of information. In setting these elements side by side, each individual composition then proceeds intuitively, allowing structure to form and visual ideas to emerge in a manner that contains controlled and spontaneous processes.

What this means is that whilst his work seems fairly abstract, the different elements each have been placed there for a reason... but perhaps the medals need a little explanation for them to make sense to the un-initiated.

The medals are circular, like the shape of the world.
The curved background is reminiscent of an amphitheatre.
The angular logo in the centre is supposed to be jewel-like yet architectural, in reference to the modern city where the Games are being held.
The cris-cross lines are apparently an image of 'radiating energy' that represents the athletes’ efforts.
The wiggly line is like the River Thames and also a ribbon, because this is, after all, a celebration.
The square draws the eye in towards the other details.

Each medal is engraved around the side with the discipline for which the medal has been awarded, and hangs on a royal purple ribbon as a reference to the fact that the Games are happening in London during the year of the Queen's Jubilee. They were produced at the Royal Mint headquarters in Llantrisant, South Wales.

The medals are being displayed at the British Museum throughout the Games. And of course being proudly worn (and, I have heard, taken to bed by) the athletes who have won them.