Here at Harriet Kelsall Bespoke Jewellery we feel very strongly about the promotion and use of ethical jewellery practices. But, today the words 'ethical' and 'jewellery' are not often used in the same sentence, so many customers ask us; What is involved? What ethical options are there?

The Fairtrade Foundation launched Fairtrade precious metals in February 2011, and we were one of the first jewellery companies in the UK to ‘sign up’! Now you may ask; ‘what is a Fairtrade metal?’, this is an important question to ask and one which we hope in the future won’t be necessary as the idea become more popular in the jewellery trade. This involves a greater monitoring of the product and making sure that mines are operated in an ethical and environmentally friendly manner. This entails the use of Artisanal Small Scale Mining also known as ‘ASMs’, of which ours is located in the Chocó region of Columbia, Peru and Bolivia. These small mines are required to meet certain standards to protect the people and environment surrounding. The ecosystem is protected via the prevention of damage to the topsoils, the minimal and safe use of toxic chemicals such as cyanide and mercury, re-forestry programmes and the use of traditional methods. The workers and local people are also protected both financially, environmentally and ethically, with campaigns such as equal rights for women holding an important part of the process. ‘Traceability and Transparency’ has become a popular concept in the world of fairly traded materials. This basically means that we as a company have a strong sense of the ‘chain of custody’ for fairly traded metals e.g. the metals are traced accurately from the mine to our company. This way we know where the items have come from and can be sure that you as a customer are receiving a fairly traded engagement ring, eternity ring, or wedding rings. 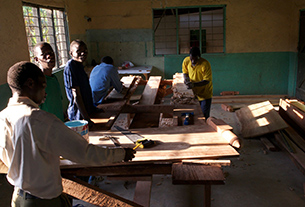 We have also signed up to the ‘Golden Rules’ developed by the ‘No Dirty Gold’ Campaign, to make sure our mines meet several basic standards in the practice. These involve; the use of safe working conditions, mining is not operated in areas of high ecological value, there is no dumping of mine wastes into oceans, rivers, streams or lakes etc.

I’m sure many of you are aware of the concept of the ‘Blood Diamond’, as made famous in film by Leonardo di Caprio from 2006 which highlighted the conflicts in Sierra Leone between government and rebel forces made possible by funding provided by diamonds. The use of ‘Conflict diamonds’ has resulted in the estimated loss of 3.7 million lives in Angola, the Democratic Republic of Congo and Sierra Leone. The Kimberly Process seeks to prevent this by stopping blood diamonds from entering legal jewellery supply chains. Here at Harriet Kelsall Bespoke Jewellery we are members of the British Jewellery Association, which has a policy of only using conflict free diamonds.

Sadly the Fairtrade Corporation has yet to bring about the use of Fairtrade gemstones… lets keep our fingers crossed for the future though! Just remember, if you are concerned about ethics of gemstones you are considering using in your engagement ring commission, you could always consider choosing recycled gemstones e.g. re-use stones that are unwanted from other pieces of jewellery. Not to worry though, we source our gemstones from trusted suppliers to make sure gemstones are as responsibly sourced as we can and offer fairly traded metals for our customers needs, so you can be sure that your engagement ring, wedding ring or eternity ring is as ethical as possible.