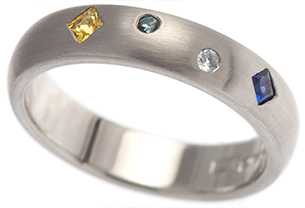 Birthstones are given as gifts that symbolise the month a person was born in on the Gregorian calendar. Did you know that Gregorian calendar poems were popular in the UK and used to include the details of monthly birthstones? The monthly gemstones are even detailed in the Bible! Exodus 28: 17-20 actually details twelve gemstones and the zodiac symbols on The Breastplate of Aaron! In ancient times gemstones were believed to have come from the heavens, when worn these gemstones are supposed to be lucky and an important influence upon the wearer. The tradition of wearing birthstones actually originated in Poland during the 18th Century, when everyone owned the twelve birthstones and wore them on a cycle to coincide with the month in which the gemstone would have its greatest influence!

They of course make lovely birthday gifts, and you can even buy birth month inspired bouquets from local florists if you’re hoping to stick with a themed gift! Birthstones can also make a fantastic way to personalise an eternity ring, wedding ring or even your engagement ring! If you want to give your eternity ring a really special touch why not include the birthstones of you children or partner?

If you are looking to choose a birthstone inspired engagement ring, wedding ring or eternity ring but aren’t quite sure of the gemstone, don’t worry… there’s plenty of choice! It can get a little confusing as there is a whole variety of birthstone lists including the; traditional, modern, mystical and ayurvedic! Below is a list of the traditional birthstones, but don’t worry… if you’re not sure your partner would like their traditional stone check out one of the other lists… you might find something he / she would prefer!

January - Garnet is the birthstone for people born in January. It is a symbol of faith, eternity and truth.

February- Amethyst is a symbol of wit, health and is considered a lucky gemstone.

March - Happiness and understanding are associated with March’s birthstone aquamarine.

April - For those of us lucky enough to have been born in April the birthstone is of course a diamond and is known as a symbol of eternity, courage and health.

May - May’s birthstone is emerald and is believed to stand for fidelity, goodness and love.

June - Pearls have always been a popular option for jewellery pieces and have always been known for their elegance. In fact, you will often see them adorning members of the royal family! Pearls are believed to stand for nobility, peace and beauty. Sadly pearls are not an ideal choice when choosing between eternity rings as they are organic gems and are fairly delicate as a result. If you would like to commission a piece using this gem for a loved one, why not consider having a pair of earrings or a pendant commissioned?

July - Rubies along with the colour red are of course associated with love. These lovely gemstones are also the birthstone for the month of July and symbolise enthusiasm and strength of character.

August - Peridot is a lovely green gemstone which is believed to be associated with success, as well as peace and luck!

September - Sapphire is the birthstone for the month of September and symbolises truth and serenity. Sapphires are usually associated with the colour blue; however you can actually source them in a variety of colours including pink, green, purple and yellow!

October - Opal is the birthstone for October and is associated with purity, hope and health. This was a popular gemstone during the Art Nouveaux period and was famously used in the jewellery of René Lalique. These gemstones are sadly not an ideal option for eternity rings however if you are hoping to give one as a gift you could choose a pendant, necklace or pair of earrings.

November - Topaz is November’s birthstone and is thought to symbolise courage, wisdom and sincerity.

Of course today there are; state, country, astrological, anniversary, day and even hour gemstones! So there is definitely no need to feel limited for choices!