From ancient times, gemstones have been believed to be possessing mysterious special powers. These birthstones were traditionally linked to the Zodiac.

However,modern birthstones are linked to calendar months, and each month has its own unique birthstone, with its own fabled properties. Many people love to wear jewellery set with their birthstone, as the ancient meanings and associations with these stones still intrigue them.

The first written records for the use of birthstones, can be found in the book of 'Exodus', in the 'Old Testament'. It is agreed by some that the initial use of gemstones for tapping their powers may have stemmed from their use in breastplate of the Hebrews' High Priest. The breast plate had various gemstones set in a gold filigree pattern. The twelve gemstones were supposed to have been representing the twelve tribes of Israel. However historians also believe them to be representations of the 12 signs of zodiac. Despite this being the first ever written record on the use of gemstones, it is said that wearing birthstones actually became popular in Poland, in the 15th and 16th centuries. 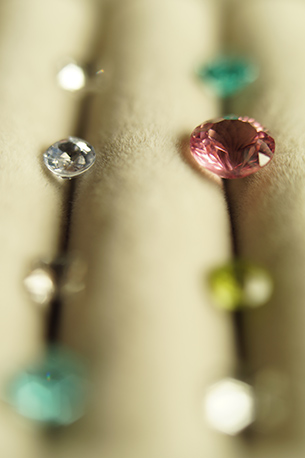 JANUARY – GARNET
The birthstone for this month is the garnet, which was once thought to be connected with the blood. This stone is supposed to protect the wearer from nightmares and offer guidance through the dark. Garnets are traditionally thought of as deep red, but actually come in a wide range of colours such as orange and green, so there is something to suit everyone.

FEBRUARY – AMETHYST
The birthstone for this month is the amethyst, and the folklore attached to this gem associates it with sobriety, tranquility, protection and peace. This birthstone as also been linked to improving the skin and preventing baldness, as well as protection from deceit. The amethyst birthstone comes in varying shades of purple, and can be a pale lilac in colour.

MARCH – AQUAMARINE
This month's birthstone is aquamarine, which has been linked to the making of new friends as well as affection and love, hope and health. This stone was once also thought to protect those at sea. As the name of this birthstone suggests, it is a green-blue in colour and has a rich, sparkling look. You can get aquamarine birthstones in a variety of shapes and sizes.

APRIL - DIAMOND
One of the most popular gems throughout history, diamonds are the birthstone for this month, and these stones are linked to love, eternity and strength. This has contributed towards diamonds being the most popular gems of all time when it comes to romance, such as engagement rings and wedding bands. Diamonds are very strong and hardwearing, making them the perfect birthstone to wear on a daily basis. You can enjoy many different cuts of this stone.

MAY - EMERALD
This month's birthstone is the beautiful emerald, once linked to health and the curing of ailments, as well as being associated with the ability to see in to the future, giving them an almost bewitching, magical reputation.

JUNE - PEARL
The elegant pearl is the birthstone for the month of June, and this gem has been linked with chastity and modesty, making it something of an angelic, pure birthstone. They are also linked to successful and happy marriages.

JULY - RUBY
The birthstone for this month is the ravishing ruby, a stone traditionally linked with protection and harmony.

AUGUST – PERIDOT
The birthstone for the month of August is peridot, which was commonly linked with protection against evil and night terrors, as well as a gem that enhanced the properties of healing drugs. Lime green in colour, this birthstone is a by-product of volcanic action, and comes in all sorts of shapes and sizes. This birthstone gives off its own unique energy.

SEPTEMBER - SAPPHIRE
Sapphire is the birthstone associated with September, and this gem has been linked with faith and purity, as well as foresight. It was thought that the stronger the sparkle of the gem, the more faithful and honest the wearer. Sapphires can come in other colours as well as blue. These are strong and durable gems that will last for years to come, and can be passed down to future generations.

OCTOBER - OPAL
The birthstone of October is the opal, a stone that has been linked to purity, hope and innocence. This gem has also been linked to healing forces, friendship and emotion, so it has experienced its fair share of folklore over the years. This type of birthstone comes in white or black, and both variations have remnants of other colours within them. Opals have a unique look and beauty, making them a very interesting birthstone with a strangely exquisite appearance.

NOVEMBER - TOPAZ
The birthstone for this month is topaz, once linked with sanity, healing, and life, as well as being connected to strength by the ancient Greeks. This stone has even been linked to an ability to make the wearer invisible in dangerous situations. This birthstone comes in a range of colours including golden, blue, pale green, pink and red, as well as some other rare colours.

DECEMBER - TURQUOISE
The given birthstone for December is turquoise, and this precious stone was once linked to happiness, fortune and luck, making it a very popular gem in centuries gone by. Turquoise can range in colour from mid-blue to a green-blue or light green colour, and this birthstone is unusual and beautiful, making it a very distinctive.