I've been looking into all things ethical for Harriet (and for my own interest) and thought other people might also like to find out a little more about who's who in the ethical jewellery community and what some of the acronyms which people might use mean. Anything in italics will be covered elsewhere in my list, as it's published. I'll split my research so far across several blogs (as it's rather long!) so here we go with C. 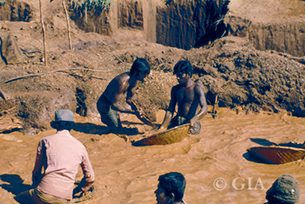 The Catholic Agency for Overseas Development, the official overseas development and relief agency of the Catholic Church in England and Wales, and highly instrumental in Fair Trade advocacy and human rights issues.

Diamonds mined in Canada which are considered ethical because working conditions are controlled and regulated. As a company we don't use these as we feel that we should support the people in developing countries whose governments really do depend on the income from the mining to pay for healthcare, education etc and who really do need the work. The diamonds tend to be laser inscribed on the girdle so you can look up your individual stone on a database, which does appeal to some customers.

Conflict diamonds, also referred to as blood diamonds, are diamonds that originate from areas in Africa such as Sierra Leone and Angola which are controlled by forces or factions, or corrupt governments responsible for fuelling conflict and wars. Small scale diamond mining was exploited and these diamonds were often used to fund military action by the forces, action that has resulted in the loss of an estimated 3.7 million lives in Sierra Leone, Angola and the Democratic Republic of Congo.

Whilst many of these conflicts have now been somewhat resolved, the problem of conflict diamonds still exists and always will. The Kimberley Process has also gone a long way to preventing conflict diamonds from getting into the legitimate supply chain, but as a company we feel that we have a continuing duty to the millions who have suffered to make sure these diamonds do not infiltrate the diamond industry. For our own peace of mind we ask customers who are using diamonds bought elsewhere to provide evidence that their diamond is conflict free or sign to say that their diamond is from an old piece of jewellery and they therefore cannot tell its history.

Based in Ontario, Canada, the DDI supports artisanal (small scale) diamond diggers and their families all over the world, and is hoping to bring 'development diamonds' to the jewellery industry - 'diamonds that are produced responsibly, safely, with respect of human and communities' rights, in conflict-free zones, with beneficiation to communities and payment of fair prices to miners’. It is complementary to the Kimberley Process, and is aiming to prove that where diamonds have been a catalyst for war and conflict they can also be used to promote, peace, stability and development. It is the most extraordinary project, and one which I will be following with interest.